history
of the pilgrimage

Why make a pilgrimage to Chartres?

THE RELIC OF THE VEIL OF THE BLESSED VIRGIN
Ever since the 9th century, THE VENERATION OF OUR LADY’S VEIL HAS BEEN THE ULTIMATE PLACE WHERE PILGRIMS MEET WITH THEIR TENDER MOTHER FROM HEAVEN: Notre-Dame du pilier, Notre-Dame de la belle verrière and Notre-Dame sous terre all welcome Our Lady’s children to make their burden light.

Notre-Dame de Chartres cathedral: the precious setting of a relic of the veil of the Blessed Virgin

In 876, Charles the Bald, King of France and Emperor of the West, donated to Chartres an inestimable relic that he had inherited from his grandfather Charlemagne: the veil of the Virgin Mary.

Tradition has it that this veil, worn by the Virgin Mary at the Annunciation and the Nativity, was kept in Constantinople before being given to Charlemagne by the Empress of the East… It is a piece of plain, cream-coloured silk measuring 5.35m by 0.46m, dating from the first century.

Although it was spared by the fire of 1194 which ravaged the cathedral and was the indirect cause of the magnificent reconstruction we admire today – the veil was protected by monks for three days in the crypt – it only partially escaped the revolutionary fury of 1793. It was cut into pieces of which only two survived, and can be seen today in the large reliquary in the left-hand apsidal chapel, and the small reliquary in the crypt.

History of
the Chartres Cathedral

Following the fire of 1020, Bishop Fulbert decided to rebuild the cathedral using a bold and innovative approach that would make it one of the main pilgrimage centres in medieval Europe, with its miraculous statue, the veil of the Virgin Mary and the “puits des saints-forts” (“well of the strong saints” where early Christians were martyred) that are the treasures of Chartres.

A Romanesque plan of construction was chosen, but with an original design and considerable dimensions for the time. The building is 120 metres long and ends in an apse with an ambulatory and radiating chapels that served as a model for many later buildings.

The architect wisely designed two churches in one: the more classical upper church with a cathedral function, and the underground church that can still be seen today, consisting of two long corridors leading from the western façade to the ambulatory where the well and relics were located.

It was again a fire that ravaged Fulbert’s Romanesque cathedral in 1196, sparing the underground church. It was this fire that prompted the rebuilding of the cathedral, turning it into the model for classical Gothic architecture in the early 13th century.

Many of the elements with which the Master of Chartres experimented here became iconic in Gothic architecture: the circular pillars surrounded by four colonnettes, the three-level interior elevation playing on the contrasts between the shadow of the continuous triforium and the light from the high windows. Numerous preserved elements, such as the royal portal showing the Christ blessing, surrounded by the tetramorph and the elders of the Apocalypse, as well as the interior paintings, the trompe l’oeil of stonework, make this building a precious witness to sacred architecture of the 12th and 13th centuries. 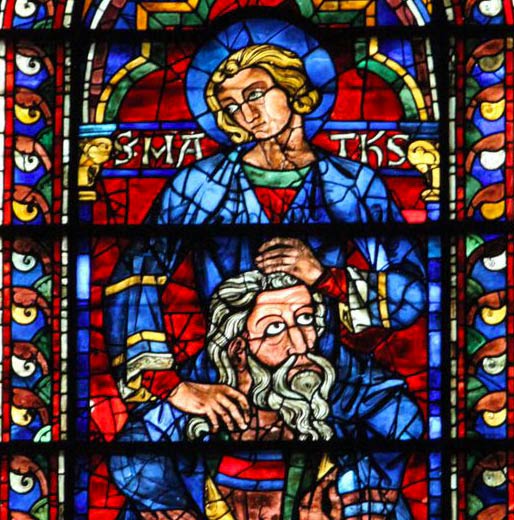 The spiritual blossoming
of Chartres

"We are like dwarves perched on the shoulders of giants"

With the success of the Chartres pilgrimage came also the spiritual and intellectual blossoming of the city with its cathedral school.

Bernard of Chartres, an early twelfth-century philosopher, was typical of this renaissance. With his now famous phrase, “We are like dwarfs perched on the shoulders of giants”, he reconciled the great authors of antiquity with Christian philosophy, but also insisted on the complementarity between the Old and the New Testament. The stained-glass windows under the southern rose show the evangelists perched on the shoulders of the prophets who announced the virginal conception of Christ.

Birth of
a Marian pilgrimage

“Pray well, my dear little one, for the success of the Chartres pilgrimage, in which I will be taking part, and which will bring together at the feet of the Blessed Virgin many pilgrims from our beautiful France, in order to obtain the graces which our Fatherland so much needs in order to show itself worthy of its past.”

Louis Martin, father of Saint Thérèse of the Child Jesus, 1872
Even though it had already been established for several centuries, devotion to Our Lady soon took on a huge dimension in Chartres: countless miracles kept alive the vibrant faith of the Middle Ages. Mary healed the ill, protected the city – and also watched over pregnant women.