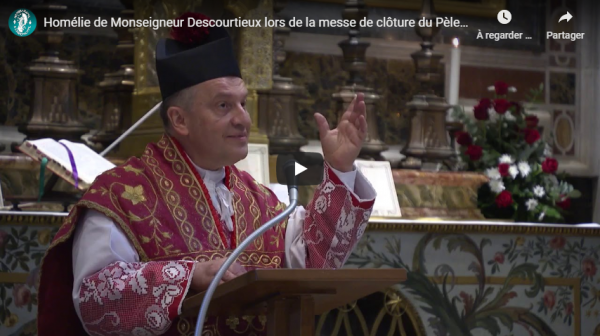 who have invisibly travelled not only the 100 kilometres that separate Paris from Chartres, but also the 1,472 kilometres that separate Chartres from Rome, (according to my computer), welcome to this Basilica built on the very place where Peter, the prince of the Apostles, gave the supreme testimony, the testimony of the blood, at the end of his own pilgrimage, which had taken him from a humble village of Galilee to the capital of the Roman Empire.

This year, the main test consisted not in walking under the sun or on the roughness of the road and paths, but in the sacrifice that had to be made of three exhilarating days, during which we see the spires of Notre-Dame de Chartres, getting gradually closer. Chartres: the cathedral which, according to Charles Péguy’s beautiful metphor, is "mistress of wisdom and of silence and shade" (Prayer of postponement). You don't choose your tests. It is the Lord who sends them to us, always proportioning them to what we are able to carry with Him. So here we are, not illuminated by the famous stained glass of the cathedral or near Notre-Dame de Sous-Terre, but, thanks to the benevolence of His Eminence Cardinal Angelo Comastri, Archpriest of Saint Peter’s, in front of the altar of Sainte Pétronille, who, in the middle of the 8th century, was given as patroness to France by Pope Stephen II during his exchange with King Pepin the Short, the father of the Emperor Charlemagne. It was here that the first workers' pilgrimage from France came in 1889, under the leadership of Cardinal Langénieux, Archbishop of Bordeaux, and it is here too that a Mass is celebrated every year for France, at the request of the French Embassy to the Holy See.

But there are many more than purely French memories to evoke here, since the pilgrimage of Christendom brings together pilgrims from all over the world. You had, dear pilgrims, a theme for reflection that invited you to expand your gaze far beyond the visible world, since you have invoked our holy Guardian Angels, angels who are present on this very beautiful table which you see and which shows, in a striking compression of time, the burial of Saint Petronilla, at the same time as her entry into heaven, where she is received by Christ risen in his glory, who shows her his hands martyred on the Cross and opened with the greatest generosity that you can imagine.

On earth, ten characters are represented. In heaven, only nine, but among them, there are perfectly distinguished seven angels, who surround Jesus and Petronilla. Their attitudes are eloquent: none of them looks at us, but all of them work for us: one is about to crown Petronilla, four others support Christ in glory, to whom they offer the support of their praise and their services, while the two older ones look at the sky, where they see the Father and the Holy Spirit, who remain totally invisible to our eyes. In doing so, they also invite us to go beyond the visible stage and to remember that our true home is in heaven, as Saint Paul says (Phil 3:20).

Our Holy Father the Pope lives a few hundred metres from here. He prays for you and he blesses you all. Very often he celebrates the votive mass of the holy angels and, every year, on October 2, on the feast of the holy guardian angels, he comments on a text taken from the book of Exodus which will speak particularly to you, as pilgrims. The Pope, in fact, quotes this text - "I will send an angel before you to keep you on the way and to send you to the place that I have prepared for you" (Ex 23:20), then he recalls that the Church celebrates our "fellow travelers, the protectors of our path, the angels who are precisely with us, on the path", because, he adds, "it's true, life is a path on which we find traps and perils for ourselves. We need a compass, but a human-sized compass. (…) Our guardian angel is not only with us, but he also sees the Father. He is related to Him. He is thus a bridge, every day, from the time we get up until the time we go to bed "(homilies of October 2, 2014 and October 2, 2018).

On the road we have walked, at least in thought, we have met angels and witnesses, and, at the end, we confront the texts that the very first disciples of Christ, Saint Luke, left us in Acts, and Saint John, in his Gospel. These jewels are both at the end of your pilgrimage and at the starting point of what follows. Saint Luke in the Acts shows us Saint Peter announcing the risen Christ to a group of Jews who learn to believe. The Holy Spirit intervenes directly in an extraordinary way, and all ask for baptism, which brings them definitively into the Church.

It is indeed both an end and a starting point, exactly as in a pilgrimage: the end of a life lived lacking the true meaning of existence and in the darkness of ignorance – those pagans led a life without true goal - but it is also a magnificent starting point towards a life of intense union with the Father, through His Son and in the Spirit. What happened on the shores of the Mediterranean, in Caesarea, with a pagan Roman centurion, of the Italian cohort, named Corneille, is the passing on of the Gospel to the whole of that pagan world that was not heir to the promises of Israel. Each of us is the heir to this gift.

With Saint John, of whom Monsignor Leonard told us last year that he had summed up his whole Gospel in this sentence "God so loved the world that He gave him his only begotten Son, that whoever believes in him should not perish, but may he have eternal life ”(Jn 3:16), all is said, indeed: at the start, an infinite love, that of God the Father for the world. Saint John insists, in his first letter: "It was not we who loved God, it was He who loved us" (1 Jn 4:10). At the end, love still infinite, since eternal life is the endless contemplation of the love of God that worked in us, everywhere in space and always in time, thanks to the Spirit who "filled the universe" as we sang yesterday (cf. Sg 1, 7). Between the start and the end, between the point of departure and the point of arrival, love always sustains us, but here we are deeply involved. The Lord will ask us at the Last Judgment: how did you love me, how did you love your neighbour?

Today, dear brothers and sisters, thinking of Our Lady of Chartres, praying for all our families, for our friends, but also for our enemies, let us decide to be, in the company of our guardian angels, pilgrims of love who accept to receive their life as a gift to give to the Father of all mercies (cf. 2 Cor 1, 3). Let us entrust ourselves to Our Lady of the Road, who walks all the way with us and ask her to inspire us to never give up our Christian vocation. Let us be seized by Christ to be offered by Him to the Father, in the fire of the Holy Spirit.

In the name of the Father, the Son and the Holy Spirit. Amen.